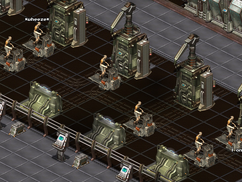 Human battery is a term for humans used as batteries by the Calculator at Coppertops in 2197.

The human batteries are humans forced to run on treadmills to produce energy, especially small energy cells, for the Calculator's army, under the supervision of the gloating robot in a hidden warehouse named Coppertops.

Though some will ask the Warrior to kill them, doing so will net a large amount of negative Karma.

The human batteries appear only in Fallout Tactics.

Retrieved from "https://fallout.fandom.com/wiki/Human_battery?oldid=2836900"
Community content is available under CC-BY-SA unless otherwise noted.