Humans are the dominant species of the post–apocalyptic age. The word is specifically used to denote those unaffected by radiation as opposed to mutants like ghouls and super mutants. Non–mutated humans are sometimes called normals, smoothskins, or bleeders by their mutant counterparts.[1][2][3][4]

Post-nuclear humans, as a direct result of the radiation and exposition to the F.E.V. of the West Tek research facility[5] and some other biochemical agents[6] released into the environment during and after the Great War, exhibit more diversity, primarily in genetic structure. The aforementioned factors have resulted in an increased rate of mutations in humans, although very few of these result in phenotypical changes. Most of these changes are non-lethal, non-damaging variations in the human DNA that simply increase the gene pool variety. Also, humans with minor mutations, like additional toes, skin lesions due to TDC infection, permanent red eyes, permanent varicose veins, or complete lack of hair are still considered to be humans.

"Pure" humans, or "prime normals" are theoretically humans that have not been mutated unnaturally by radiation or other post-War pollutants. They can be said to be original humans, no different than those from before the War. However, because of the widespread and pervasive fallout in the wasteland, these represent a very small minority of all sentient species on Earth. They exist only in isolated factions, such as in remote areas untouched by radiation, an example being underground vaults.[7] Some vaults, opening after the radiation has faded, can produce tribes which can be said to be pure, such as the Boomers. Used in a broader sense to term those humans with a low to relatively radiation-free state, being a pure human is more properly attributed to those who are affected by the FEV in the way intended from before the Great War.[8][9]

All of these variations have been uniquely interpreted by the Enclave leadership as the basis for claiming that the humans living outside the Enclave and isolated vaults are no longer pure; rather, that they are, in fact, "near-humans" that pose a threat to the supposedly "pure" humanity living in the aforementioned locations.[10][11][12] This theory, based in the claims of Dick Richardson and John Henry Eden is relatively vague in fact: debate remains whether these genetic variations are considerable enough to substantiate a new species of human, or even if the differences exist at all. It is also claimed by the super mutants that humans not exposed to radiation (those located in vaults) will transform into superior mutants when exposed to FEV, as opposed to wasteland humans.[13]

These mutants have identical or near-identical phenotypes compared to normal humans, and most of their differences are distinctly positive, if still unnatural, evolutions. These forms of mutants are more drastically different both physically and in usual personality from normal humans compared to the above, lesser deviations. They are often thought of and treated as altogether separate species from humanity by some.

In Fallout, Fallout 2, Fallout 3, Fallout: New Vegas, Fallout 4, and Fallout 76, the player character can only embody a human. Fallout Tactics allowed one to control other races (see Fallout Tactics race), even though the player could only start as a human and Fallout: Brotherhood of Steel is the only Fallout game allowing players to choose a ghoul as the principal player character.

Human non-player characters suffer extra damage from headshots both in V.A.T.S. and in free-fire mode.

All the human residents of Appalachia were killed or had left the region before 2102; the only humans that were alive were the inhabitants of vaults including the player character. Since the Wastelanders update, living humans from outside Appalachia have returned to the region. With the introduction of the Steel Dawn update, Brotherhood members from the West coast have traveled to the region as well.

Human players will start with either a weapon or a piece of armor at the beginning of the game. Humans do not gain any bonus or advantage during gameplay. Human enemies in the game are weakest to leg attacks and body attacks, and almost always drop loot. 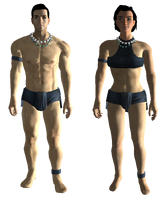 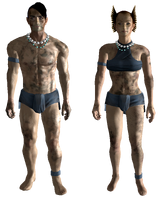 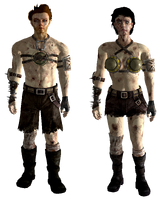 Human infected by the Troglodyte Degeneration Contagion in Fallout 3 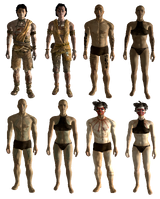 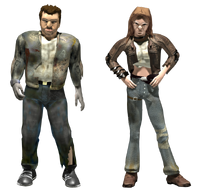 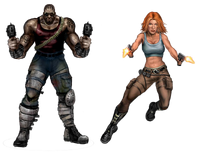 Human (Cyrus and Nadia) in Fallout: Brotherhood of Steel 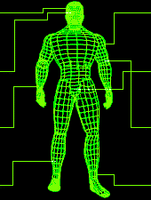 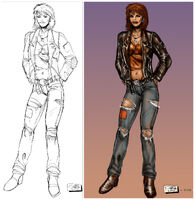 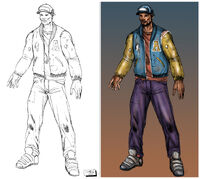 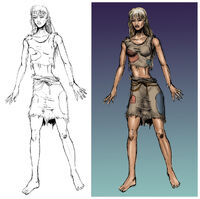