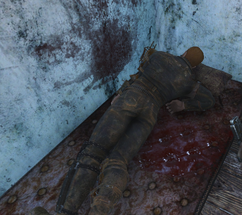 Hugo's corpse as you find it 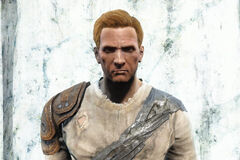 Hugo is a former raider that can be found dead in Hugo's Hole in 2287.

Hugo was a member of the raider posse living in Dunwich Borers who, for unknown reasons, left the group and moved to a makeshift stronghold nearby. When the Sole Survivor first arrives in the vicinity, a gunshot can be heard. Upon making their way through the booby-trapped entrance, they find Hugo's corpse on his bed, apparently having committed suicide.

Next to his body, there is a table with a hazmat suit, a Mr. Handy model kit, and a holotape which gives details of his struggle. Listening to the tape reveals that Hugo was under the influence of some kind of supernatural force that he referred to as "it." He plotted to go back into the quarry and kill all his former gang mates, but "it" kept him from doing so and ultimately compelled him to kill himself. The entity is implied to be the same one that pervades Dunwich Borers.

Hugo appears only in Fallout 4.

The nearby Dunwich Borers and Hugo's tape as well as The Dunwich Building in Fallout 3 are all references to H.P. Lovecraft's The Dunwich Horror. The being he refers to is probably one of the great old ones, i.e. Cthulhu, who turns people insane by simply seeing him.

It's possible that Hugo's body may not appear. Reloading to a previous save should fix this. [verified]

Retrieved from "https://fallout.fandom.com/wiki/Hugo?oldid=3283628"
Community content is available under CC-BY-SA unless otherwise noted.
... more about "Hugo"
RDF feed
Has platform
PC +, Playstation 4 +  and Xbox One +