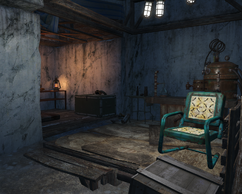 Hugo's Hole is a small area that is comprised of large marble blocks forming a hallway and living quarters. The entranceway is heavily booby trapped and irradiated (up to 127 rads/s) with a machinegun turret at the end.

Past the booby traps is a very small room containing Hugo himself, who has committed suicide with a 10mm pistol. There is also an Expert locked trunk and a chemistry station.

One can hear a gunshot as they are approaching the area where Hugo kills himself.

Hugo's Hole appears only in Fallout 4.

Hugo can be heard shooting himself again if the player returns after letting some time pass. This is likely due to the cell resetting.[verified]

The heavily trapped and irradiated entrance to Hugo's Hole

Dunwich - Hugo's struggle holotape
Add an image to this gallery

Retrieved from "https://fallout.fandom.com/wiki/Hugo%27s_Hole?oldid=3183343"
Community content is available under CC-BY-SA unless otherwise noted.