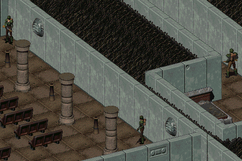 “Time to die, infidel! The Great Wheel rolls over you!”

The Hubologist guards are guards stationed in the Hubologist compound in San Francisco's Golden Gate in 2241.

All clad in the recognizable green combat armor and well armed, they are stationed at the compound to protect the Elron indoctrinees and in particular AHS-7 and AHS-9. Going by their way of conversation, they appear to be under similar indoctrination as the Elron Hubologists, yet with a clear purpose and are not to be messed with.

Hubologist guards appear only in Fallout 2.

Retrieved from "https://fallout.fandom.com/wiki/Hubologist_guard?oldid=3127533"
Community content is available under CC-BY-SA unless otherwise noted.