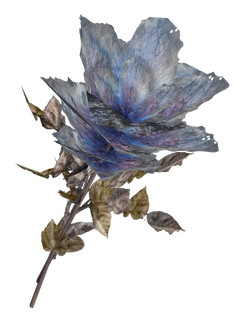 “Large hanging purple flower. Bitter, but appears to have some restorative benefits. Will continue to investigate.”— Senior Scribe Neriah, Botany terminal - The Prydwen

Hubflower is a consumable in Fallout 4.

Ranunculacae serranus, commonly called hubflower or soot flower (Appalachia), is a mutated species of buttercups, a family with over 2,000 known species of flowering plants before the Great War. The herbaceous plants have evolved due to the mutagenic pressure of the war. They create sizable bushes with large, hanging, and bitter-tasting violet flowers that have restorative effects[1] and can be processed into a variety of curatives, ranging from teas and pastes, through salves, to a variety of drugs.[2] For the Chemist perk, this item is treated as a chem, as the HP gained from consuming it will increase.

Retrieved from "https://fallout.fandom.com/wiki/Hubflower?oldid=3410222"
Community content is available under CC-BY-SA unless otherwise noted.