“The best marksmen of the NCR are usually at the rear of any battle. The gun will allow us to strike at them.”— Lucius, Fallout: New Vegas

The howitzer and other artillery are pre-War weapons that were used by the United States Armed Forces, some are mobile, some are stationary but all use the same basic principles and gunpowder as a propellant. They provide covering fire for ground forces, anti-air support, can soften up fortified targets, or fill a role in testing new varieties of shells, most notably saturnite. A large number of these weapons were stored or fielded in various parts of the country. 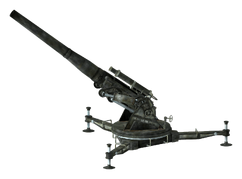 An anti-aircraft gun is positioned at the top of Hoover Dam. The dam would have been especially vulnerable from the air during the Great War; however, the airstrikes never came, and full-scale nuclear war broke out instead. It is likely the New California Republic keeps the gun in working order to prevent a surprise attack by anyone who manages to salvage pre-War technology or those who have post-War technology, such as the Enclave. Despite this fact, it is not used by them during the Second Battle of Hoover Dam to stop the Boomers or Enclave remnants from utilizing their aircraft as it is destroyed by the Legion early in the battle[1]. The gun can also be rigged to explode or reprogrammed during the Caesar's Legion quest Arizona Killer to assassinate the NCR president, Aaron Kimball. 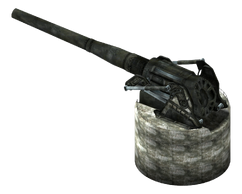 Several fixed guns were positioned in Alaska to help safeguard the Alaskan Pipeline, however when the People's Liberation Army invaded the guns were seized and turned on the United States Armed Forces. During Operation: Anchorage the guns were finally silenced. How exactly control or destruction of the guns was carried out is unknown, as the only surviving record was a simulation that may or may not be entirely accurate in its portrayal of events. The guns make another appearance in Big MT, at the X-7a "Left Field" artillery launch. The guns at Big MT fire test rounds comprised of Saturnite (a space-age material), one of these shells can be used in a test firing targeted at the X-7b "Boom Town" target zone. The resulting crater reveals a hidden cache that the player can loot. The gun has infinite ammunition but it can only be fired into the X-7b and it only takes one shell to make the crater.

One of the howitzers in possession of the Boomers

Howitzers, as they appear in the Boomer museum mural

The broken howitzer at The Fort

The view from above the dam

A scenic view of the fixed guns located in Big MT

A clearer view of the fixed guns 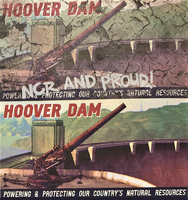 Concept art, Behind the Bright Lights & Big City
Add an image to this gallery

Retrieved from "https://fallout.fandom.com/wiki/Howitzer?oldid=3307521"
Community content is available under CC-BY-SA unless otherwise noted.