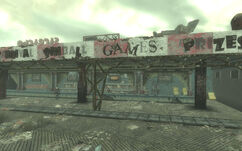 “But I'm being rude! I am Madam Panada, and this is Madam Panada's House of Wares! For all things a traveler needs, I am here to provide! Bullets! Stimpaks! Armor! Weapons! Junk! If you need it, Madam Panada has already anticipated your need and procured it months ago!”— Panada

House of Wares is a small shop owned by Panada. Its only other inhabitant is a friendly protectron.

Madam Panada's House of Wares offers a variety of badly repaired items, as Panada herself is only trading to make a living. Her real calling (so she believes) is divination.[1]

Panada has taken up residence in the shooting gallery, opposite the bumper cars. A special red protectron patrols near the skeeball racks. There is a bed with a first aid box and two ammunition boxes between the bumper cars and Naval recruiting center.

House of Wares appears only in the Fallout 3 add-on Point Lookout.

Sign above the shop
Add a photo to this gallery

Retrieved from "https://fallout.fandom.com/wiki/House_of_Wares?oldid=3382155"
Community content is available under CC-BY-SA unless otherwise noted.