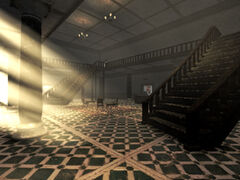 “What you want to know? Whole place used to be some kinda rich bastard resort, back before the war. Now the Rangers use the old resort, and we grunts get to live in tents. Fucking typical.”— Razz

The House Resort is a large, luxurious resort lying to the east of New Vegas in Camp Golf.

Before the War, the building was owned by Robert House. Today, it has been adapted by the New California Republic as part of the military base Camp Golf.

There is a large lobby area with some small offices through a door at the rear, a storage area containing numerous metal boxes and ammunition boxes on the shelves to the left, a bunk area and kitchen to the right, and two sets of stairs leading to a second floor with several bedrooms and an external deck.

The House Resort appears only in Fallout: New Vegas. 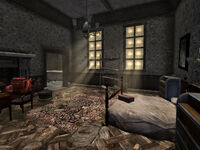 Bedrooms on the second floor 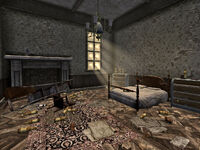 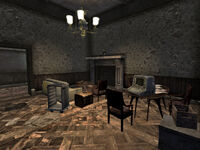 Room with a terminal, in one of the back rooms, 2nd floor 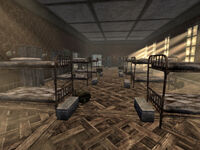 Bunk room, right of the entrance
Add an image to this gallery

Retrieved from "https://fallout.fandom.com/wiki/House_Resort?oldid=3115324"
Community content is available under CC-BY-SA unless otherwise noted.