Hotel Rexford is an unmarked location in Goodneighbor in 2287.

Hotel Rexford provides lodging for travelers and scavengers stopping in Goodneighbor. Owned by chem dealer Marowski, the establishment has employed Clair Hutchins for over 40 years.[1][2]

In the past, the hotel catered to a more sophisticated crowd, and parties were thrown often.[3] Before the Great War, the hotel was a client of Gwinnett Brewery, from which they ordered half-barrel kegs of Gwinnett Pale Ale, Peabody Pilsner, Dead Redcoat Ale, and Bunker Hill Brew on a monthly basis.[4]

The first floor has a lobby where the Sole Survivor can rent an upstairs room, with two small restrooms to the right and Marowski's office in the back. Stairways to the west and east lead up to the second and third floors, with an Expert-locked closet off the western stairway containing a steamer trunk and two ammo boxes. Four rooms are on the third floor, one of which is occupied by the Vault-Tec rep. The basement features Fred Allen's Novice-locked terminal and minor loot.

Hotel Rexford appears only in Fallout 4. 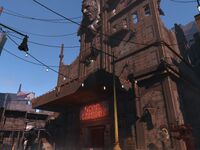