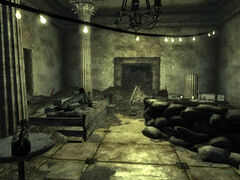 The hotel is an unmarked location in the Capital Wasteland in 2277.

Known only as "hotel," this location is used by the Brotherhood of Steel as an outpost and can be found at Pennsylvania Avenue, near Penn. Ave/Georgetown Metro and the White House. The accessible area of the hotel is very small. This is due to a collapsed ceiling that blocks off access to anything other than a small entrance room and the hotel lobby.

Outside the hotel on the first arrival, three Brotherhood of Steel paladins are fighting super mutants. There is no special dialogue or quest activation, the Lone Wanderer can either help them or watch them fight alone against the super mutants.

Immediately left through the first doorway there is a rigged shotgun and one paladin sleeping on the bed inside. Setting off the shotgun wakes them, but despite being in a combat stance they do not turn hostile. They will begin to walk around the rather small hotel shortly after being woken up.

Obtaining the skill book inside is considered stealing unless Broken Steel is installed and Take it Back! has been completed.

This hotel appears only in Fallout 3.

The appearance and location of the hotel, specifically the giant clock, is based on the Old Post Office Pavilion building in Washington, D.C.