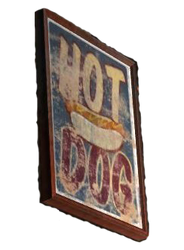 A hotdog is a mentioned-only consumable in Fallout and Fallout 4.

Hot dog are a pre-War sausage made from meat turned into a slurry and piped into a casing and cooked; closely associated with the frankfurter from Germany. The hotdogs would then be packaged and sold and bought by consumers who would typically steam or grill them and place them in a split bun.[1]

Hotdogs were described by Buster Connolly of the Boston Bugle as having been part of baseball fans' diets for years.[2] Hotdog stands were a common sight around the city of Boston, with a hand-in-hand relationship with baseball, but were a staple across all of pre-War America.

Retrieved from "https://fallout.fandom.com/wiki/Hotdog?oldid=3450274"
Community content is available under CC-BY-SA unless otherwise noted.