“Rumors have been circulating about a Vault with a pool, sauna, and even a hot tub! Search Vault 189 to find this oasis of relaxation, but beware of the ghoul infestation!”

This quest takes place in Vault 189, which will be generated with a random layout. The players dwellers will mostly face feral ghouls in groups of three to five, but will also likely face mole rats in groups of two to three, and radroaches in groups of three. Further in there will be glowing feral ghouls that are accompanied by four additional feral ghouls. One of the glowing ghouls will yield three Nuka-Cola Quantums on its corpse, and the room it is in contains a legendary weapon recipe. Near the bottom of the vault is a dweller who will give the players dwellers a lunchbox, and the room they are in contains a legendary junk item and a rare weapon.

This quest's name is a reference to the 2010 comedy movie Hot Tub Time Machine. 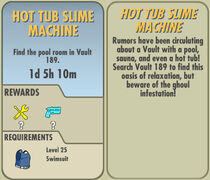 Rewards
Add an image to this gallery
Retrieved from "https://fallout.fandom.com/wiki/Hot_Tub_Slime_Machine?oldid=3269336"
Community content is available under CC-BY-SA unless otherwise noted.