14 hours
“Raiders have been snatching up folks all over the Wasteland. Put an end to their scheme, and save their victims.”

Hostage Negotiations is a single-stage overseer quest in Fallout Shelter.

A typical rescue mission in which wastelanders have been captured by raiders. The player can choose to send out dwellers and save them.

After arriving at the raider base, the player's dwellers will encounter a large number of raiders spread throughout several rooms. As they progress they will free two hostages in separate rooms, and will then face a raider boss. 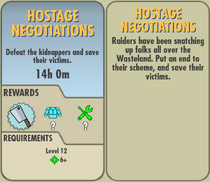