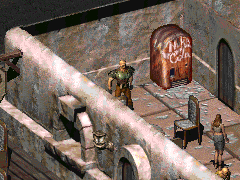 “You either fight me or I'm gonna tell everybody what a spineless little baby you are. Bare fists, right here.”

Hoss is a large, muscled man spending his days in Dusty's Cantina in 2241.

Hoss, described as a big, dumb-looking and over-muscled lunk,[1] is the son of President Tandi and is a real pain for the local bartender Dusty.

If the Chosen One gets Hoss to back down, Dusty will provide them with drinks on the house. Tandi will also be impressed and state that someone who can put her son in his place may be just the right person for a job she needs help with.

The Chosen One can either ignore him (-5 Karma) or accept his challenge, where, upon landing the first successful hit, Hoss' spirit breaks and he yields faster than one could think. Pulling a gun on him also freak him out, and will not draw attention from the police.

Hoss can be spoken to outside of his proximity, where he will not initiate combat and attack. However, should he be approached doing this, he will be hostile.

Hoss appears only in Fallout 2.

Retrieved from "https://fallout.fandom.com/wiki/Hoss_(Fallout_2)?oldid=3073102"
Community content is available under CC-BY-SA unless otherwise noted.