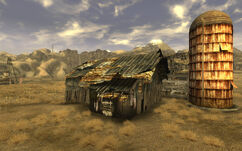 The Horowitz farmstead is a location in the Mojave Wasteland in 2281. It is located just northwest of the New Vegas Strip.

A large building and an old pre-War barn next to a grain silo, this location is currently guarded by three Vipers.

Consisting of a large building and an old barn next to a grain silo, this location is guarded by three Vipers. There is a campfire for crafting, beds, and lootable items in sacks and crates inside the barn where the Vipers' camp is. Although the Vipers respawn, the loot does not.

Located to the southwest of the dilapidated barn as well as between the silo and the barn are live frag mines. The building with an intact silo does not have a visible doorway or entrance. Next to the fallen silo is a small shack with a reloading bench against the outer wall.

The Horowitz farmstead appears only in Fallout: New Vegas.

The farm can be discovered on the player's map by walking into the adjacent power substation.[verified]

Retrieved from "https://fallout.fandom.com/wiki/Horowitz_farmstead?oldid=3432197"
Community content is available under CC-BY-SA unless otherwise noted.