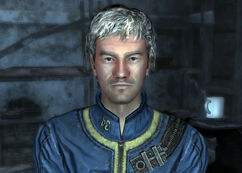 “We're lucky to be here, alive and well. The land's a mystery to us, but we'll find our place in it.”

Horowitz is one of the few non-ghoulified denizens of Vault 34 found in 2281 to have remained alive in spite of their vault's reactor meltdown.

A resident of Vault 34, he and a few others were trapped when someone detonated a bomb in the swimming pool area. They left an SOS in the terminal outside the reactor room of the vault. Rescuing these survivors is one possible choice during the quest Hard Luck Blues. He is the de facto leader of the small group of survivors. All of them wear Vault 34 jumpsuits. They can be killed without loss of Karma.

Retrieved from "https://fallout.fandom.com/wiki/Horowitz?oldid=3233720"
Community content is available under CC-BY-SA unless otherwise noted.