The Garrahans and Hornwrights were the two major families in charge of Appalachia's mining industry. They owned lavish estates in the mountains overlooking the mines.[4]

Hornwright Industrial Mining Company was a staple of Appalachian mining since the first pick was driven into its soil - and under Daniel Hornwright's leadership, it would be something far more. Embracing Vault-Tec's mantra of preparing for the future, Daniel decided to bring his father's company into it, thoroughly misinterpreting his father's words that "products are only as good as the people who build them." While Daniel's father emphasized the human component, his son took it to mean that the products were only as strong and reliable as the workforce. As such, the moment he took control of the company, he went full throttle on every automated worker program the company had. Without human workers, the company would have no more sick days, no more vacations, no more maternity leaves and sudden deaths in the family. He could reduce the number of people needed to run the company, yet maintain the same output and quality control. The flagship Auto-Miner program was the beginning of an ambitious program to fully automate Hornwright before 2100, becoming one of the strongest and wealthiest companies the world had ever seen.[5] The Rockhound, activated in 2070 atop Mount Blair, may have put Hornwright in the spotlights, but it was the Auto-Miners that would build its legacy.[6]

Hornwright started by sacking miners who worked in Hornwright mines, replacing them with Auto-Miners, and continued with a series of pilot projects to see what other molecules of the human element he could banish from the mining process. This included leaning on contacts in the Department of Defense, which provided him with the plans for vertibirds. The vertical take-off craft, outfitted for long distance flight, air-to-ground combat and reconnaissance could become a platform to carry an Auto-Miner brain and mineral detection system and speed up the pace of mineral surveying by a factor of twenty.[5]

Naturally, with his stubborn pursuit of efficiency and profit, Hornwright neglected the impact his work would have on the environment. The Rockhound installed atop Mount Blair polluted Appalachia, the Ash Heap especially, devastating the ecosystem and filling the air with soot and ash from the strip-mined mountaintop. As any recovery measures would cut into his bottom line, the CEO refused to entertain such measures. However, when the Clear Skies Alliance approached the company with a proposal for shared ownership of air scrubbers that would purify the air, the CEO was interested. Not because of genuine concern for the environment - the millions of dollars of development costs were too high a price to pay for breathable air - but because of the potential to repurpose the scrubbers to ionize particles and convert them into usable minerals. These secret "Ash Forges," as Hornwright marketing called them, were set up in the Ash Heap to test them in practice and appease the Clear Skies Alliance.[5] To make things worse, in order to feed the ash forges with input, Hornwright deliberately ignited the old, toxic mines around Mount Blair to fill the air with mineral-rich soot. Even Hornwright's own scientists were horrified at such wanton disregard for the environment.[7]

This was one of several signs that Daniel Hornwright's mental state was deteriorating. The biggest hit to his sanity and the company's profile came with the Motherlode project. Although originally intended to be merely an automated, weak AI platform, the project took on a new meaning for the CEO after the death of Evelyn Hornwright from cancer. The Motherlode became Hornwright's obsession, turning into a single-minded pursuit of its completion to prove to his late wife that her death wasn't the end of him - it was just the beginning. Naturally, the scientists working on the project did not appreciate the obsessive level of scrutiny and micro-management that followed. Dr. Jose Brigada, the head researcher on the Motherlode project, was eventually fired for his resistance to the CEO and replaced. Hornwright's obsession turned into casual cruelty when he decided to spin the death of Bill Breyer, an investigative reporter from the Charleston Herald, to advance his automation agenda. Breyer trespassed on a Motherlode test site to find out the truth about the project and was promptly shot by security guards, who mistook his recorder for a firearm. To Hornwright, this was merely a PR opportunity.[5]

Of course, such a philosophy led to him trampling over people and eventually, the miners had enough. When Atomic Mining Services forced families out of the town of Welch in early October, the disenfranchised workers of Appalachia rose up against the corporations, leading to riots across Appalachia. The fighting was particularly severe around Charleston and the Ash heap. On Mount Blair, miners seized the Rockhound, a despised symbol of automation. For eight days, the miners held out, striking and demanding a right to work, until the National Guard sent in specially-designed fleets of combat robots - Strikebreakers, commissioned by Hornwright in the wake of the mine protests - to eliminate off the rioters. Echoing the events of the battle of Mount Blair over 150 years earlier, the Strikebreakers took out the miners and returned control of the Rockhound to Hornwright. The remaining human staff of Hornwright Industrial was disturbed by the violence and the brutality of the response, but to the CEO, it was just evidence of the need to expedite automation. With the Motherlode project operating at peak capacity and exceeding expectations (despite Daniel's interference), the company would soon be able to remain in operation with a staff of just twenty. However, there was one item that still needed attending to.[5]

In Daniel's eyes, the Garrahans of Garrahan Mining Headquarters needed to be humiliated in order to demonstrate that automation's superiority. As luck would have it, Hornwright was granted a golden opportunity to prove his philosophy to the world in April 2077. Vivian Garrahan, CEO of Garrahan Mining Company, decided to play all-in and challenge Hornwright to a duel where her Excavator power armor and Auto-Miners would compete to mine the most ore in a pre-set amount of time. The challenge was a calculated risk, aiming to raise the profile of the company and the project, while securing lucrative contracts in the increasingly automation-obsessed Appalachia.[8]

The challenge turned out to be the decisive battle of the Hornwright/Garrahan war: 24 hours of non-stop mining.[9] The challenge started on October 18 and lasted the whole day, with Auto-Miners and Excavators effortlessly chewing through the rock at their designated sites. They were a match for one another and by the end of the day, Hornwright won by a thin margin, just 1.85 tons - less than a single truckload - and stood supreme. Hornwright Mining seized on this tenuous victory as an example of machine's superiority to man.[10] What they did not mention is the fact that Hornwright's executives did not play fairly and intervened to ensure that Garrahan would fail. In the end, they succeeded, making Auto-Miners the talk of the region and sending Garrahan's stock into free-fall, making them ripe for a takeover. They folded the groundbreaking Excavator project into the Auto-Miners, creating a fleet of autonomous miners capable of pin-pointing mineral deposits with no oversight from human operators.[11]

Hornwright's ambitions did not end there. Daniel Hornwright was one of the biggest supporters of Ballot Measure 6 in Appalachia, which would have increased funds allocated for automation and a mandate to eliminate human employment within a decade. Naturally, that also meant working closely with Governor Evans, both officially and unofficially, providing political and financial backing in return for lucrative contracts for automation once the Ballot Measure passed. The CEO was sure that a local concern rather than a national, impersonal conglomerate like RobCo would help make the measure palatable to the Appalachians.[12] The sheer volume of contributions eventually put the governor on Hornwright payroll.[13]

As with the Excavator, Daniel Hornwright also took steps to eliminate any potential obstacles. Senator Sam Blackwell, an outspoken and charismatic opponent of the measure, was targeted by a goon hired by Hornwright. Threats made against his family forced the senator into hiding, also weakening the Free States in a time of need. Hornwright did not care, he was just happy to see the senator out of the picture, at least until the Great War erased all of his plans.[14]

Daniel Hornwright turned a company that focused on its workforce into a brutal, almost completely automated vehicle for generating revenue. His hard anti-union, anti-regulation stance translated into senior executive recruiting practices that emphasized predatory corporate practices, corruption, and utmost loyalty to the company.[15] Daniel effectively forced his HR department to implement his requirements, threatening them with immediate dismissal if they refused to cooperate.[16] As expected, the company took a hardline stance against protesting miners. When Penelope Hornwright expressed reservations about hiring human strike breakers, CEO Hornwright commissioned RobCo Industries to create a fleet of dedicated police robots capable of dealing with protesters without the interference of conscience. These Strikebreakers became an increasingly common sight on the slopes of Mount Blair in the days leading up to the Great War.[17]

Environmental impact was of no concern for the company, as long as their actions generated immediate profits. Perhaps the most notable example of this philosophy was the deployment of Clear Skies Alliance air purifiers around Mount Blair, which they repurposed as ash forges to harvest minerals from the polluted air. To maximize their efficiency, Hornwright set the old, toxic mines around the mountain on fire to fill the air with smoke and soot that the forges could then harvest, horrifying the team that worked to create them.[7] Similarly, the company cared little for the economic impact it had on local communities. It ruthlessly exploited the vulnerable Monongah by buying the rights to the mine in the struggling town for cash in April 2075. They proceeded to strip-mine every remaining bit of ore from its veins for the next two years.[18] Although the city experienced a large monetary surplus by April 2076, thanks to royalty payments,[19] it effectively imploded when the mine was exhausted in January 2076[20][21] and Hornwright stopped making the payments in August 2077.[22] By September 2077, the town was bankrupt and had to suspend all public programs while scrambling to find a source of financial relief.[23]

While hostile to Garrahan, HWI enjoyed lucrative contracts with Atomic Mining Services. AMS was a reliable market for Auto-Miners, which were cheaper and faster than anything AMS could create. Penelope Hornwright's history with AMS was a major factor contributing to the decision, as she lobbied her father and AMS intensely to form the partnership, combining the efforts of two of Appalachia's most prominent mining companies.[24]

Ironically, while Daniel Hornwright worked to destroy the Garrahans and assimilate them into his empire, his daughter was in love with Bryce Garrahan. The two star-crossed lovers could have ushered in a peaceful merger and a new future of Appalachia, were it not for their parents' hostility and conflict.

Hornwright Industrial is mentioned only in Fallout 76. 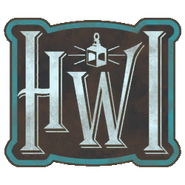