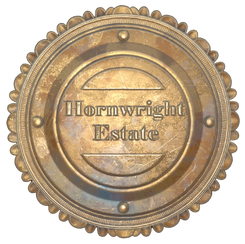 Hornwright Estate is a location in the Savage Divide region in Appalachia.

This estate is the seat of power of the Hornwright family, owners of the Hornwright Industrial Mining Company. It's a classic example of a Mega Mansion, a marker of wealth in Bramwell, on the edge of the Ash Heap.

The ground floor contains traces of the miner riots that swept through Appalachia shortly before the Great War. The bricked foyer contains a looted bar and a secure elevator leading up to the Mega Mansion and down to the estate safe room.

The Hornwright Estate access keycard is located on the top floor executive level of the Hornwright Industrial headquarters. One can also be found inside the Hornwright summer villa, on a cart in the basement.

The estate has four floors in total, filled with useful loot and information about the Hornwrights. The lowest floor contains the helipad and trophy room, directly opposite the elevator, with the kitchens just behind it. The western wing contains two master bedrooms, a great room, and a conference room, with the main dining room and lounge on the opposite end of the floor.

The second floor, overlooking the first in the western and southern parts, contains Penelope Hornwright's bedroom in the northwest, complete with a locked safe, and her office across, to the southeast. The guest bedrooms line the northern section of the floor, while the eastern part of the level contains the pool table room, gym, and lounge.

Up the staircase flanking the pool table room lie the workshops used by the Hornwright family. The western chambers contain weapons, armor, and tinker's workbench, along with a plethora of robot parts, while the eastern part is a mechanic's room.

The top deck contains the most representative part of the mansion, a great hall with a Stingray Deluxe fighter suspended beneath the decorative ceiling, with an open-air swimming pool and jacuzzi baths on the end of the deck.

There is also a safe room built below the estate, accessible via the elevator, originally functioning as Daniel Hornwright's private laboratory.[1] It can only be accessed during the quest Trade Secrets. Inside the safe room is Penelope Hornwright, who only recently returned to her family's estate. A weapons workbench and a tinker's workbench can be found along the western wall.

Hornwright Estate appears only in Fallout 76.

Rope bridge east of the estate

Living area of the saferoom

Power armor
Add a photo to this gallery

Retrieved from "https://fallout.fandom.com/wiki/Hornwright_Estate?oldid=3454654"
Community content is available under CC-BY-SA unless otherwise noted.