Horizon Airlines or Horizon Skyways was an airline carrier in the United States before the Great War.

Wrecks of their aircraft can be seen at Boston Airport and other locations throughout the Commonwealth, and another, Flight 1207, crashed on Mount Desert Island.

One airplane with an unknown number crashed in the Mire region of Appalachia and another crashed in the Forest region and its fuselage was eventually repurposed to form the Horizon's Rest settlement.

The company is mentioned in the Fallout: The Roleplaying Game Rulebook.[non-canon 1]

Horizon Airlines is mentioned in Fallout 4, its add-on Far Harbor, and Fallout 76.

Another view at the airport

Horizon Flight 1207 wreck on The Island

Horizon Airlines wreck in the Mire

Repurposed wreck at Horizon's Rest in the Forest 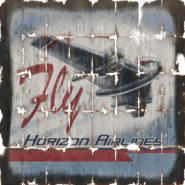