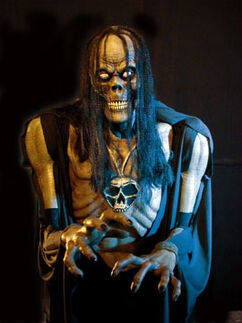 Horatio is a very large ghoul from the Reservation, who almost resembles a super mutant. One could surmise that in his "smooth skin" days, he could have been an offensive lineman for pro football or a professional wrestler. Either way, his size carried over to his current ghoul form.

Horatio was one of the followers Willem Clark, brought back from his trek into the wasteland almost two hundred years ago. He was so grateful to Willem for bringing him back to the Reservation, that he devoted his life to him. At first, Horatio was a bodyguard to Willem. But over time, and when slave trading became regular, Willem put Horatio in charge of all slave trade and slave security. No human would think of revolting against a giant of a ghoul who looked so, well, REVOLTING – at least that was Willem’s reasoning.[1]

Horatio does not have much to say unless the player has slaves to trade, or the player knows of a potential slave route. Other than that, Horatio will get quickly irritated by an inquisitive player and suggest he either leaves or becomes a slave. If the player is particularly strong and healthy (ST > 6 and EN > 6), then Horatio will try to convince the player to inquire about a little experiment that has to do with procreation.

Horatio has not appeared nor is he mentioned in any published game. He was to appear only in Van Buren, the canceled Fallout 3 by Black Isle Studios. It is not certain if he will appear in any future Fallout game.

Retrieved from "https://fallout.fandom.com/wiki/Horatio_(Van_Buren)?oldid=3123853"
Community content is available under CC-BY-SA unless otherwise noted.