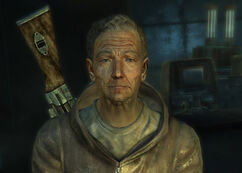 “Oh, all right. So maybe I didn't wipe his mind, like he asked. But I buried it! Deep! Almost as good, really. But it's still there. Still accessible. All you need to do is use the recall code. Just say to him, "Activate A3-21 Recall Code Violet" and that will activate the hidden subroutines.”

Dr. Horace Pinkerton, a self-described talented electrician, scientist, and surgeon, is a reclusive inhabitant of Rivet City's broken bow in 2277. He was at one time a former council member of Rivet City who was replaced by Madison Li after a disagreement between them that resulted in Pinkerton storming out.

Horace Pinkerton was born in 2217. At the age of 60, he is a bitter old man who helped turn Rivet City from a ruined aircraft carrier into a livable community. He's grown tired of people and spends the remainder of his days isolated within his broken bow workshop, which also serves as his living quarters. Most of the residents would be surprised to find that he is still on the ship, let alone living there. Belle Bonny knows that he lives in Rivet City still, and is willing to release this bit of information through conversation. Doctor Li and Seagrave Holmes remember him from the early days, but assume he left Rivet City decades ago.[1]

In his early twenties, he helped lead the remnants of the Naval Research Institute in a search for new lab space until they came across an abandoned aircraft carrier around 2237. After clearing out the mirelurk infestation, he and his team moved into the carrier and set up their science lab. Soon after, the population within their new home began to grow, leading Pinkerton to name the aircraft carrier Rivet City and to even form a council in 2239, which consisted of himself along with Annette Holmes and Brad Danvers.

After Doctor Li arrived in Rivet City, Pinkerton's science team became enamored with Project Purity, and left Pinkerton to conduct his research on his own. Angered by this turn of events, Pinkerton expounded his views on the futility of Project Purity. Eventually, he was forced out of the Rivet City council and replaced by Doctor Li. In a self-imposed exile, Pinkerton moved his home and lab into the broken bow of the ship. Years later, most of the inhabitants of Rivet City are no longer even aware of the location of Pinkerton or his hidden science lab. To many, his existence has become a legend.

Pinkerton is the doctor who performed facial reconstruction surgery and a mind wipe on the android Harkness in order to help the Railroad hide him from the Institute. A brash and talented scientist, Pinkerton is the only known person in the Capital Wasteland who has the skills to perform such complicated surgery.

Horace Pinkerton appears only in Fallout 3.