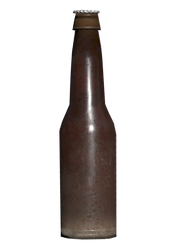 “Woah, is that the padding of paws I hear? The howl of wolves? Now I'm certain I can hear every single blade of grass. Hoppy Hunter lives up to its name.”— Biv

Hoppy Hunter IPA is a consumable item in the Fallout 76 update Wild Appalachia.

It shares its model with the regular unlabeled beer.

Hoppy Hunter IPA can be crafted using the brewing and distilling functionality of Wild Appalachia.

Retrieved from "https://fallout.fandom.com/wiki/Hoppy_Hunter_IPA?oldid=3267380"
Community content is available under CC-BY-SA unless otherwise noted.