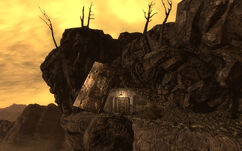 The Hopeville silo bunker entrance is a location in the Divide in 2281.

The entrance leads to the Hopeville missile silo bunker which is part of the Hopeville Missile Base, which was operated by the Ballistic Defense Division of the Commonwealth Defense Administration.

Given the solid construction of an ICBM bunker, coupled with its construction inside of a mountain, the entire facility has an alarming tilt, likely caused by the massive upheaval of the Divide's formation.

Entrance to the silo bunker
Add a photo to this gallery
Retrieved from "https://fallout.fandom.com/wiki/Hopeville_silo_bunker_entrance?oldid=3309211"
Community content is available under CC-BY-SA unless otherwise noted.