The Hopeville missile silo bunker is a location in the Divide in 2281.

The Hopeville missile silo bunker is a large facility, extending the entire breadth of the northern map. The entrance is a standard bunker door leading into a hallway that leads into the main room. On the right is a door that will lead to the bot pod, unlocking the ED-E copy. On the left is an L shaped hallway with a maintenance closet. Leading onto the silo door is a broken duraframe eyebot.

In the center of both rooms is a large computer-like system which can be used to restore electricity to the building, giving access to the latter of the two rooms. Beyond the door is the missile. There will be a terminal on the far right that deactivates the sentry bot in the next room.

When re-entering the bunker after completing the add-on, marked men will be hiding out in the bunker on the first, second, and third levels. 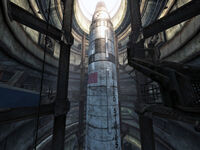 The missile inside the silo

Eyebot upgrade circuit board, to the left the silo entrance, ground level 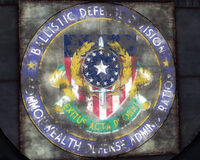 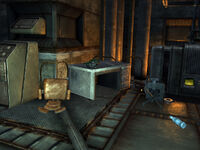 Silo view from the top

Silo view from the bottom

The silo entrance, on the other side of the Divide
Deutsch
Community content is available under CC-BY-SA unless otherwise noted.
Advertisement