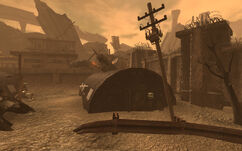 The building is located near the Hopeville Missile Base Headquarters. The building itself is a quonset hut, similar to those found at Nellis Air Force Base.

The armory can be entered using a holotape, by hacking with a Science skill of 75, or a Lockpick skill of 100. Once inside, there is a locker to the left as well a counter with miscellaneous ammunition on it, as well as a Very Hard locked locker. Along the right wall are a few rockets on top of a counter. In the far right corner is a bed that can be slept in. The bed does not give the "well rested" bonus.

The Hopeville armory appears only in the Fallout: New Vegas add-on Lonesome Road.

Rockets on the table
Add a photo to this gallery
Retrieved from "https://fallout.fandom.com/wiki/Hopeville_armory?oldid=3500894"
Community content is available under CC-BY-SA unless otherwise noted.