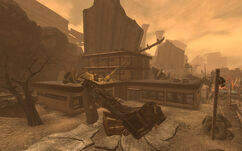 The Hopeville Missile Base Headquarters is a location in the Divide in 2281.

The building served as the command center of the base before the Great War.

The building has two floors, but the second floor is inaccessible due to the ceiling caving in. The building contains the main lobby that splits into a hallway and another room. The hallway has two rooms in it. Two marked men inhabit its interior, and two more can be found on the roof. A commissary terminal is located here, in the same room as an Auto-Doc. A RALPHIE poster for the Feel Like a Kid Again challenge is outside of the building, on the northern wall.

Located outside the front doors of the building is a single Nuka-Cola vending machine. Further inspection reveals the remains of a human skull and two arms. It appears as though someone was crushed while attempting to access the machine and was never rescued.

The Hopeville Missile Base Headquarters appears only in the Fallout: New Vegas add-on Lonesome Road.

The eyebot upgrade circuit board in the ruined office

RALPHIE poster
Add a photo to this gallery
Retrieved from "https://fallout.fandom.com/wiki/Hopeville_Missile_Base_Headquarters?oldid=3394791"
Community content is available under CC-BY-SA unless otherwise noted.