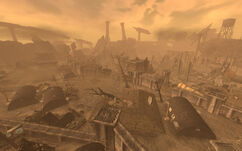 The Hopeville Missile Base (known as Hopeville Ballistic Defense Station pre-War) is a location in the Divide in 2281.

The west entrance to the missile base consists of the Hopeville women's barracks (accessible through detonating a warhead) and a decrepit gas station to the northwest. In the gas station is a workbench, two toolboxes, a metal box, and a floor safe behind a pile of large tires.

To the northeast is the Hopeville Missile Base Headquarters, guarded by few marked men. There is a RALPHIE poster on the wall in the gas station next to the workbench, for the Feel Like a Kid Again challenge.

The second of the two entrances to the Hopeville Missile base, the east entrance is close to the marked men camp. The Hopeville men's barracks is right across the street.

Upon exiting the Hopeville missile silo bunker for the first time, Ulysses will speak to the Courier through ED-E, and depending upon the Courier's responses, a flag may be completed for the Most Likely To... challenge: Choosing the Perception option, pass or fail, will trigger a completion flag.

The Hopeville Missile Base appears only in the Fallout: New Vegas add-on Lonesome Road.

Authorized military personnel only
Add a photo to this gallery
Retrieved from "https://fallout.fandom.com/wiki/Hopeville_Missile_Base?oldid=3366939"
Community content is available under CC-BY-SA unless otherwise noted.