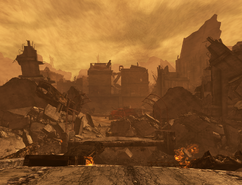 “Hopeville, High Road, Ashton… tiny cracks in the Earth, nothing compared to the road carved ahead.”— Ulysses

Located in the southwestern corner of the Divide, Hopeville was home to both the missile base and its facilities, as well as a regular town housing civilians and providing services to soldiers stationed at the base. A highway passed by the edge of the base before heading out west, with another road passing through the base grounds and connecting to the High Road superhighway network. The Solitare gas station was part of the public road, cleaving the silo off from the base.

Located in the western part of Hopeville, the missile base was separated from the highway and the town by a combination of chain link fences and fortified walls. The entrance built into the western cliffs led to the Hopeville missile silo (one of several ringing the base) while the base grounds proper stretches between the fences and walls to the east. The road bisects the base into two halves, with the northern section housing the command center and one-half of the barracks, while the southern one housed the loading station and armory, together with auxiliary buildings.

Hopeville proper was herded in by walls terrain features, and the superhighways, with buildings clustering together around the road passing through the town. Two main gates connected the town to the base. The northwestern corner contained the fire station and local corners and shops serving the personnel of the missile base, while the opposite end contained industrial and office buildings. Two centuries of neglect and the devastation unleashed by the Courier have left little trace of the civilian life, with the ruins serving as marked men outposts.

Retrieved from "https://fallout.fandom.com/wiki/Hopeville?oldid=3362289"
Community content is available under CC-BY-SA unless otherwise noted.