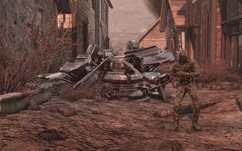 Ally: Hope Remains is an ally quest for Sofia Daguerre in the Fallout 76 Wastelanders update.

Sofia Daguerre has found another signal, this time originating from the flight suit of her crew member. While chances are slim, Sofia hopes that her crew is still alive. She asks for her host to investigate the wreckage the signal originates from for traces of life, or at least to give her some closure.

Go to Welch. Starting from the U-Mine-It! vending machine southwest from Welch Station, head southwest in between the post office and the ice cream shop next to it until finding the wreckage. Retrieve the U.S.S.A. crew dog tags from the wreckage and return them to Sofia to complete the quest.

Retrieved from "https://fallout.fandom.com/wiki/Hope_Remains?oldid=3468291"
Community content is available under CC-BY-SA unless otherwise noted.