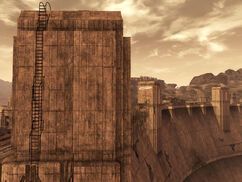 The three towers on Hoover Dam

You'll Know It When It Happens

“If I was the assassin, I'd be up on that ridge. Or if I didn't care about escaping, maybe that near tower, or the landing pad behind us.”— Craig Boone

Four towers atop the dam's southern face, providing access to other parts of the structure and housing restroom facilities. Two of the towers are located on the New California Republic (NCR) side of the Hoover Dam checkpoint building, and the other two reside on Caesar's Legion side of the checkpoint.

Out of the four towers, the two central towers have elevators leading down to the Hoover Dam offices, with the eastern one requiring a key. The easternmost tower has been destroyed. Random junk can be found in the restroom's stalls and trash cans, and graffiti can be seen on the walls both inside and on the exterior.

The first tower is used in the quest You'll Know It When It Happens, when an undercover Legion sniper will try to assassinate President Kimball.

The Hoover Dam towers are based on the four towers atop the real world Hoover Dam, spanning U.S. states Nevada and Arizona. Two of the towers serve as restrooms, with similar interiors to those in-game. The gold hued, Art Deco style external doors also reflect the appearance of real world equivalents.

Closer look at the mural

Closer look at the mural

Tower 3, seen from the dam

Add a photo to this gallery
Retrieved from "https://fallout.fandom.com/wiki/Hoover_Dam_tower?oldid=3367820"
Community content is available under CC-BY-SA unless otherwise noted.