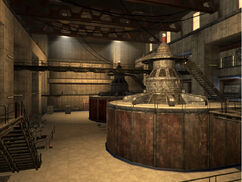 “I just need you to head over to the east power plant and manually activate the switch.”— Mr. House

The Hoover Dam power plant 04 is a location within the Hoover Dam in 2281. During the final quest, this power plant is where the New California Republic and Caesar's Legion standoff in the Second Battle of Hoover Dam.

This is the fourth and southernmost of four power plant sections, alongside plant 01, plant 02, and plant 03. All of the power plant sections have similar layouts, including a large open area in the middle with two giant turbines, with a middle and top tier of catwalks, and work areas along the walls and the floor forming the bottom of three tiers. Each tier has at least two sets of stairs connecting to the next tier up or down.

This power plant is furthest to the east. It has two turbines labeled N7 and N8, of which N7 is operational. Opposite from the door to power plant 03, a connection to Oliver's compound is located on the bottom floor. It is locked until the endgame quests begin and cannot be picked or entered via console commands. A radio sits on the ground outside of the locked door. There is also a door to the lower dam exterior on the middle floor.

To the left of the connection to Oliver's compound is a generator and workstation with an inoperable terminal. Several traffic cones surround a partition running along the workstation's perimeter. Underneath the plant, there are two NCR troopers guarding the turbines from below. The eastern end of the plant is illuminated less than the others due to several inoperable overhead lights.

In search of batteries

Oliver's compound is locked up tight

Add a photo to this gallery
Retrieved from "https://fallout.fandom.com/wiki/Hoover_Dam_power_plant_04?oldid=3412735"
Community content is available under CC-BY-SA unless otherwise noted.