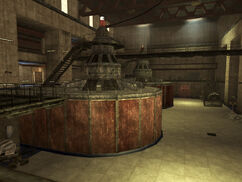 “Agreed. If we take the power plant, this battle is over. I'll have my men focus their efforts there. May the Son of Mars go with you.”

The Hoover Dam power plant 03 is a location within the Hoover Dam in 2281. During the final quest, this power plant is where the New California Republic and Caesar's Legion standoff in the Second Battle of Hoover Dam.

This is the third of four power plant sections, alongside plant 01, plant 02, and plant 04. All of the power plant sections have similar layouts, including a large open area in the middle with two giant turbines, with a middle and top tier of catwalks, and work areas along the walls and the floor forming the bottom of three tiers. Each tier has at least two sets of stairs connecting to the next tier up or down.

There are no other individuals present in this plant, which is illuminated less than the others due to several inoperable overhead lights. There are several ammunition boxes on the ground floor, near the door to power plant 02. There is a water testing site on the main floor, alongside tables, chairs, and shelving units.

Near the opposite entrance, there is a project station of sorts, with hammers, inoperable terminals, typewriters, and broken glass. Several toolboxes, hammers, and piles of scrap metal are also found in the project area. A sign that can be seen nearby reads:

WARNING!
Hoover Dam Power Plant Testing
1. Electronics can be dangerous when not used properly.
2. Authorized employees are the only ones allowed to operate machinery.
3. Always wear hard hats when in generator areas.


In this power plant, there are two turbines that are numbered N3 and N4, of which N3 is operational. There are several generators below both turbines, alongside crates, safety first signs, and several traffic cones.

In the lower level, the turbines below this plant are labeled as N5 and N6, with N5 being operational. These are the correct numbers for the power plant 03 turbines if following the numbers across sequentially. The N3 and N4 labels are also seen in power plant 02, but numbered correctly as such in the lower level.

Add a photo to this gallery
Retrieved from "https://fallout.fandom.com/wiki/Hoover_Dam_power_plant_03?oldid=3412736"
Community content is available under CC-BY-SA unless otherwise noted.