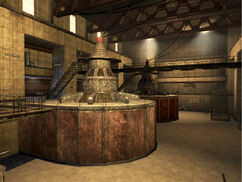 “It was not intended for war - its top sides are bound to two intake towers by a series of bridges. No doubt snipers nest there. On the far side of the dam, a small building provides access to the power plant below.”— Legate Lanius

The Hoover Dam power plant 02 is a location within the Hoover Dam in 2281. During the final quest, this power plant is where the New California Republic and Caesar's Legion standoff in the Second Battle of Hoover Dam.

This is the second of four power plant sections, alongside plant 01, plant 03, and plant 04. All of the power plant sections have similar layouts, including a large open area in the middle with two giant turbines, with a middle and top tier of catwalks, and work areas along the walls and the floor forming the bottom of three tiers. Each tier has at least two sets of stairs connecting to the next tier up or down.

There is a water testing site on the bottom floor and by the exit to the lower dam exterior on the middle tier. On the opposite side of the plant, there are several lab stations, tables, chairs, and coffee cups. There are two drinking fountains that have an "out of order sign" in front of them, next to a wrench, a toolbox, and several traffic cones.

On the second level, there is a Hard locked terminal that impacts Karma if hacked. It leads to power plant 01, which is already accessible by way of the door directly below it. This power plant houses two turbines, numbers N3 and N4, of which N3 is operational.

Water fountain is out of order

Power plant ceiling detail
Add a photo to this gallery
Retrieved from "https://fallout.fandom.com/wiki/Hoover_Dam_power_plant_02?oldid=3329014"
Community content is available under CC-BY-SA unless otherwise noted.