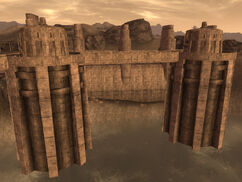 “It was not intended for war - its top sides are bound to two intake towers by a series of bridges. No doubt snipers nest there. On the far side of the dam, a small building provides access to the power plant below. That is where Oliver hides.”— Legate Lanius

Located at Hoover Dam, there are four intake towers in total. Two are located on the New California Republic side of the Hoover Dam checkpoint, and the other two are on the Caesar's Legion side of the checkpoint. An NCR guard stands at the door to intake tower 1. Each intake tower's interior is slightly different than one another, each one numerically labeled above the doorway.

The Hoover Dam intake towers are based on the four towers emerging from the real world Lake Mead, to the north of the Hoover Dam. Two of the towers are located on the Arizona side and two on the Nevada side.

Sunset behind the towers

Look at the console

Add a photo to this gallery
Retrieved from "https://fallout.fandom.com/wiki/Hoover_Dam_intake_tower?oldid=3409820"
Community content is available under CC-BY-SA unless otherwise noted.