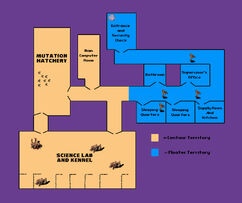 This was a top secret research laboratory in the pre-War days. Its main purpose was genetic experimentations for military exploitation; i.e. making horrible abominations to not only terrorize the enemy but also completely wreck ecosystems. The genetic mutations that would be created were specially designed to adapt to just about any ecology and take over, utterly wiping out anything else in its path. The reason why Hoover Dam was chosen was that there were several creatures in the area that seemed to be results of genetic mutations. Certain areas of the Hoover Dam Lake seemed higher in radioactive isotopes than other areas, which might have been the reason for the mutations. However, no matter the reason, it was considered a good place to start and further the process with a secret lab.

Using similar technology that the Master eventually used for his twisted purposes (he stumbled across the research in top secret computer archives), scientists made several specimens that grew to full size. However, shortly before the Great War started, a Chinese infiltration and sabotage team discovered the secret laboratory and tried to destroy Hoover Dam so the genetic work could never be used against them. Some of the Chinese stealth soldiers in Hei Gui stealth armor made it into S1C while others were planting bombs in the main generator rooms (now called the Scum Pits). One of the bombs went off prematurely and alerted all of Hoover Dam, including the guards in S1C. Things become cloudy in the reports due to the chaos that ensued, but suffice it to say that the Chinese were defeated, the generators were heavily damaged, and S1C was compromised. During the heated battle in S1C, several genetically altered creatures escaped into the halls. The guard in the guard post was ordered to leave and seal the exit hatch if ever such an emergency happened, and the guard followed orders well. A couple of Chinese stealth soldiers and four scientists were trapped in S1C after the hatch was sealed, doomed to either die at the hands, or weapons, of the enemy, be consumed by the escaped genetic creatures, or just die of starvation.[1]

If the player character ever makes it down here, they will find that the floor's integrity has been compromised. There is murky, green water that is about waist high all over the floor. The water comes from a broken wall and a hole in the floor. From that hole emerged mutated leeches and perhaps fish. Either way, these creatures turned out to be the food that has sustained the centaurs and floaters in SC1.

It was to appear in Van Buren, the canceled Fallout 3 by Black Isle Studios. The Chinese sabotage mission is mentioned in a terminal entry cut from the Operation: Anchorage Fallout 3 add-on[2].

Retrieved from "https://fallout.fandom.com/wiki/Hoover_Dam_Sub-Level_1C?oldid=3170276"
Community content is available under CC-BY-SA unless otherwise noted.