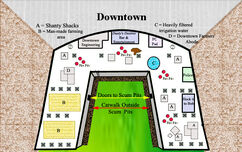 Hoover Dam Downtown is an area of Hoover Dam occupied by the working class, such as construction workers and farmers.

No town would be complete without a dive bar serving up cheap drinks and even cheaper women. Dusty Heart is the owner and proprietor of this lovely establishment, and despite being "big boned," she is quite attractive. She'll serve up the finest hooch in the wasteland with a gleam in her eye and a mysterious brown stain in your glass. She loves a good time, but will whip out the ol' Dusty Trail should folks get out of line (Dusty Trail is a pump action shotgun that Dusty always keeps within arm's reach).

The bar itself is made from a large, shack-like material (the shack tiles set) and sits at the central base of the Hoover Dam face. It looks like a typical Western saloon on the inside, complete with round tables, crappy chairs, a large bar at the back, and an even larger, super mutant bouncer, named Beatrice, covering the front door. There are rooms for rent on either side of the building.

As stated above on the Rim, Dusty gets plenty of hooch from the Crimson Caravan. Because of this, business has been very good. War makes people want to forget, and Dusty has plenty of booze and women to help the troops, and whoever else, forget about the hardships of war. Aside from buying booze and women, the player can rent out his services collecting unpaid tabs from some of the townsfolk. This won't win the player any popularity contests with the Downtown crowd, but it will get the player in good with Dusty and, more importantly, give the player a very good recommendation from Dusty to the Crimson caravan. Plus, if the player is a bit of a tough-guy, there will be the occasion when a bar fight breaks out and the player can get the opportunity to help Beatrice settle things down, either physically or diplomatically, or until the police arrive.

Lastly, Dusty is another potential distributor for smooch. Running smooch through Dusty is less dramatic than through Dr. Yuri, mostly because the junkies will be confined to the Downtown folks. If things go to shit down here because of smooch junkies, then Dodge and his men will declare martial law and overtake all operations in Downtown, including the maintenance of the machines. In addition, should the player use Dusty as a distributor, then the player may not use Dr. Yuri as one – and visa-versa. Word gets around quick and the folks at Hoover don't take too kindly to individuals playing both sides, even if it is illegal, or questionable, transactions.

This engineering facility is not nearly as nice as the one on the Rim, but it is efficient. Otto Steed is the ghoul in charge of this facility, and he is also in charge of the water purification process and chemical extraction. Inside the basic structure are two strange looking machines. One contraption is a water purifier that empties into a large pipe that goes into the ground and the fills up an outside water tub, and the other machine right next to the purifier is a chemical collector that collects sulfur and potassium nitrate.

Otto has been working closely with the former scribes on trying to come up with a way to make the filtered water drinkable – it can only currently be used for irrigation, and that's borderline. The player can help Otto with this problem by working with Jericho and their filtration processes. The player does not need to be a mechanic or science wiz to do this, but he will get more XP if he is either and upgrades the purification machine himself using the Jericho technology.

Otto is also in charge of the two working power generators that are in Baseline. Otto and Dodge are the only ones with keys for Baseline, so the player either has to kill Otto or Dodge to get the key, or agree to help them with a few problems within Baseline and the Scum Pits. This is covered more in Quests.

Otto has an assistant, named Dianne, who is highly organized and eager to take charge. She would never do anything to overthrow Otto, but she is eager to take on more responsibilities. Since Otto is a potential CNPC, should he go with the player, Dianne will take over the engineering facility.

Of all the strange places to grow wheat and corn, the top of a dam generator building has to be one of the strangest. But, thanks to the hard work of the former BOS scribes and the tender agricultural work of farmer Dave, wheat and corn do grow very nicely. With minimal dirt and scorching sun, Dave and the scribes have managed to not only grow the wheat and corn, but grow enough of it to feed the citizens of Hoover Dam and export some for trade. While this is all well and good, Joseph Dodge has asked if more wheat and corn could be grown to further raise their value in trade. Unfortunately, Dave would need a fairly large hydroponics farm to fulfill the proposed quantities Governor Dodge would like. And the only unused facility large enough to handle the proposed amount is the Scum Pits.

The Scum Pits would first need a lot of reconstructing to sustain a working hydroponics lab, not to mention that the creatures living in the Scum Pits would need to be removed. No one in town is capable of doing either, it would seem. Even if the creatures in the Scum Pits were eradicated, there is the real problem of the open holes filled with toxic goo. It is said that power generators were once housed in those holes, but some catastrophe created the necessity to remove the generators and move them into the area known as Baseline. If the toxic goo could be cleaned up, the creatures eliminated, and the materials needed to build the hydroponics farm could be found, then, and only then, could Governor Dodge's request of more wheat and corn be fulfilled.

Not much to say here except that this police station is half the size of the one in the Rim and is run by four other police officers under the watchful, though far away, eye of Ralph Peoples. These police don't give a hoot about drug use or the prostitution at Dusty's, just so long as no one hurts anyone else. Their job is to make sure violence does not break out and everyone keeps their weapons holstered. They also frown upon stealing, but usually the locals lynch the thief before the police can get to the suspect.

When other people get sick of their crap, or they need money to pay off one of Dusty's tabs, most folks at Hoover come to see Bob of Hock-it to Bob. In modern terms, Bob would be a pawn dealer. Every month Bob has something new to sell, so the player can check out Bob's wares just to see if there is something they have to have.

Bob also runs a bounty hunting business. If he feels the player can handle himself, and the player inquires about work around town, Bob will give the player bounties. Unlike modern bounties, these bounties are for dead, only. There's no where to house a felon for extended periods of time, so the mark needs to be whacked. Good characters should not feel too bad about this because the bounties are for some true low-life scum.

Some of the bounties can be found lurking around Hoover, some have been seen at other F3 locations. THIS IS WHERE YOU CAN COME IN! I'd like there to be a bounty in each feasible area like Denver, Jericho, Reservation, maybe Blackfooot, etc. Places where a stranger might be welcomed, or at least seen as a potential asset to the community.

This large container is what's used to hold all the water Otto successfully purified for irrigation. It usually runs at half-full. Nothing much else happens here.

This shack is much nicer than the others and belongs to farmer Dave. He'll be here at night, and not during the day.

Climbing down some narrow ladders near the north-center of Downtown will bring the player to a catwalk. This catwalk then leads to doors on either side. These are the doors to the Scum Pits – a place of toxic death and vileness. It is advisable to the player to use an environment suit before venturing into the Scum Pits.

Retrieved from "https://fallout.fandom.com/wiki/Hoover_Dam_Downtown?oldid=2863505"
Community content is available under CC-BY-SA unless otherwise noted.