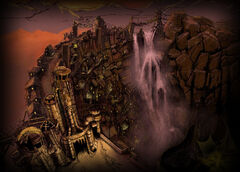 Hoover Dam is a concrete arch-gravity dam in the Black Canyon of the Colorado River, on the border between the former US states of Arizona and Nevada. It was constructed between 1931 and 1936, and is located east of Boulder City. In Van Buren, Hoover Dam was to appear very differently from its form in Fallout: New Vegas.

Since tensions were high with the Brotherhood of Steel, NCR did not want to send out their finest commanders in search of eastern lands to pioneer. So, more "expendable" commanders were chosen to lead caravans eastward to establish footholds and develop towns under the NCR banner. One of those "lucky" commanders chosen to volunteer for this dangerous mission was Councilman Joseph Dodge. At first, he tried to sidestep the "honor," but when he was told that refusing this mission would be considered an act of treason, he humbly accepted.

Luckily for Dodge, he was not sent out to blindly search for random towns to conquer, or rather, "unite" under NCR. He was given vague directions to Hoover Dam as his destination and à cause d' être. In the days before the war, Hoover Dam was a source of great power, literally, and NCR wanted to have control of that power. The technology used at Hoover Dam could rival, if not surpass, anything the Brotherhood of Steel had, and that was a temptation NCR did not want to refute, especially during the growing tensions between the two organizations.

Once Dodge's caravans and troops arrived at Hoover Dam, they found scattered packs of settlers barely eking out an existence on and around the great structure. Frequented by attacks from hostile raiders, it took little convincing on Dodge's part that it would be in the settlers' best interests that he and his NCR troops provide protection and an organized structure to the Hoover Dam region, with Hoover Dam itself being the central hub. With exuberant cooperation from the Hoover settlers, structures and fortifications were set up along the dam's rim. With each completed structure, the settlers of Hoover Dam felt more secure and safe, especially after Dodge's men made short work of attacking raiders in the early years. Everyone started to feel as if they had a purpose in the Hoover Dam community, and the Dam started to separate into a class system, with government and high-end business people occupying the area known as the Rim, and the working class, such as construction workers and farmers, occupying the area known as Downtown.

Naturally, Dodge and his NCR troops stayed in the Rim, where Councilman Dodge became known as Governor Dodge by the people of Hoover Dam, and was regarded as a fair, honest leader who brought the settlers of Hoover Dam into a time of enlightenment and self-worth. The only real trouble came when a group known as Caesar's Legion tried to invade Hoover Dam. The fighting was fierce, and Governor Dodge still to this day does not understand the motive for the attack, but suffice it to say that Dodge, the NCR troops, and the formidable wall with high powered gun turrets thwarted Caesar's invasion plans.

However, the battles did take their toll and made the east side of the Rim wrecked and uninhabitable. In fact, there is so much debris at the center of the rim, it actually blocks passage to the east side. However, thanks to the big victory over Caesar's Legions, it was obvious that both the Rim and Downtown were well taken care of and protected, that is until the war between NCR and the Brotherhood of Steel began.

The first few attacks by the BoS were easily deflected thanks to the strong, iron gates along the rim and the accompanying high-powered turrets. However, over the course of several months, supply runs that used to come regularly from the NCR base in the west started to become less frequent. Several times it got to the point where Dodge thought his men would run out of ammunition for their guns and turrets, leaving them exposed and helpless to the BoS' superior firepower. Dodge knew that he needed to find an alternative source of weaponry if Hoover Dam was to survive against the BoS.

One of Hoover Dam's caravan groups rose to the occasion. The Crimson Caravan, a caravan group who originated out of NCR itself and helped to establish the great community of Hoover Dam along with Dodge, set out to find an alternative to NCR supply runs. Dodge was more than happy to let Ailis McLafferty, the Crimson Caravan's leader, take the reigns of acquiring a new source of weapons and supplies. However, this contract with the Crimson Caravan did not sit well with their rival, the 3-Some Caravan. But that did not concern Dodge. He never really trusted the 3-Some Caravan company, especially since it was run by former NCR prisoners (incarcerated at one time for petty theft), and therefore did not want them involved in finding a weapon and ammunition source outside of the NCR home base supply runs.

It was almost six months later, and Dodge and his men were in dire straights, but the Crimson Caravan came through. Just as Dodge's men were about to fire off the last of their ammunition, Ailis McLafferty came through the main gates with a truckload of finely crafted firearms and ammunition. Ailis told dodge she got a great trading deal with a faraway tribal community dedicated to mechanical technologies, but would not elaborate as to where, exactly, the tribe was and would not go into detail on what they were like.

This was fine with Dodge since, with the new weapons and ammunition, he and his men could fend off future attacks by the BoS. This tickled Dodge even more since he got the impression that the BoS were starting to feel the pinch of extended battle and could not afford frequent attacks with depleted ammunition and supplies – a theory of Dodge's was that the BoS was starting to suffer the same fate as the NCR with few, if not all-together stopped, supply runs from BoS headquarters. Perhaps Dodge and his men would take the offensive one day and overtake the crippled BoS, he thought to himself.

Unfortunately for Dodge, the BoS seemed to have a new lease on the war and resumed assaults on Hoover Dam's gates. It was if as soon as the Crimson Caravan returned with weapons and ammunition for his troops, the BoS got re-supplied as well. Perhaps the war was going better for the BoS than Dodge had thought? He did not know. What he did know, however, was that the battle between the two organizations was going to turn into a war of attrition, with no clear winner and no advancement on either side. He may have been a mere councilman when he was at NCR, but he was smart enough to recognize futility.

Cut from the NCR

Over the course of several years, contact with the NCR disappeared completely. The supply train that would make infrequent visits to fund the war effort ceased. Dodge began to rely more and more on what the two internal caravan companies could bring in, and realized even more that in order to maintain good trading relations with the outlaying communities, internal resources must be found and mined. For a few years after NCR stopped their shipments, Dodge used a construction site that was along the center of the Rim to gather building materials not only to build structures in Hoover Dam but also to use as trade materials.

The construction site offered plenty of rebars, stone, hardened wood, and steel beams. The demand for such materials was high, so trading these resources became profitable for both the Crimson Caravan and the 3-Some Caravan companies. However, over time it became apparent that the area around the construction site was becoming weak and unstable, and any further cannibalizing of the materials there might lead to the destruction of the dam itself. Dodge ordered all access to the construction site off-limits under penalty of death.

Dodge and his community once again were in dire straits. The Crimson Caravan's mysterious trading source would not deal with them if they had nothing of value to trade. Dodge needed to think of something, and quickly. Luck was on Dodge's side one day when a resident ghoul, named Otto Steed, came to him and revealed something very interesting. Otto Steed, as it turned out, was in charge of the water purification system in the Downtown area. The water that got purified was not quite drinkable but was suitable for agriculture.

The interesting part is that the byproducts of the filtration process turned out to be potassium nitrate and sulfur – two of the primary components of black powder. Another byproduct is nitric acid, one of the ingredients to gunpowder, though not quite in the quantities of the other two. These chemicals would be very valuable to a community that had access to coal, and as luck would have it, the community that the Crimson Caravan dealt with for ammunition and weapons had its own coal source, but not a reliable potassium nitrate and sulfur source. Trade with the ammunition and weapons supplier once again resumed, and the Crimson Caravan was flying high as top-dog with Governor Dodge.

With the weapons and ammunition problem pretty much solved, Governor Dodge had another, possibly even bigger problem to contend with – battle fatigue. Even though attacks from the BoS were not as frequent as they were during the onset, the constant state of alert was wearing thin on the troops and the citizenry. Several soldiers and some of the citizens abandoned Hoover Dam in the hopes of finding a community not buried in the throes of a war of attrition. Among those who stayed, there was a longing for escape either through natural or chemical means.

Apathy almost become the watchword and resulted in many key systems starting to malfunction or shut down altogether. Otto, who has a knack for those things mechanical, tried to keep up with everything, but the breakdowns were becoming too much for Otto to handle alone. Governor Dodge knew he must find a way to stop the war once and for all, or Hoover Dam was doomed – if not by being overrun by the BoS, then by entropy and abandonment.

All the while, the Crimson Caravan Company flourished and seemed very happy the way things were.