Honey beasts are ordinary honey bees that have undergone severe mutations due to radiation. Normal-sized bees construct hives upon their backs and help defend the honey beast. They can typically be found in The Forest, the Mire and the Toxic Valley.

The honey beast is a mutated honey bee. It dwarfs a typical human in size, and features large beehives on its thorax that oozes honey. It is known to be vulnerable to fire and cryogenic based weapons.

Due to its sheer size and stubby, severely frayed wings, it can no longer fly. As such, it moves around on the ground, although it can also walk on walls. The presence of regular-sized honey bees in other locations in Appalachia suggests that honey beasts have a similar mutation to bloatflies and regular flies.

Honey beasts move slowly, and when engaging with hostiles, they will release bee swarms from the hives on their backs causing an easy distraction for the beast to make its attack. They attack slowly but powerfully and can cause immense damage if they manage to lock the player character into a stagger. Fire and cryogenic weapons do not inflict additional damage to the honey beast.

This is the base variant of the honey beast.

An even stronger honey beast variant.

A more powerful variant, the glowing honey beast is a honey beast that glows green. Like other glowing creatures it has been affected by high radiation levels and can spawn in blast zones.

A honey beast that has been infected with the Scorched Plague.

Honey beasts can sometimes appear alongside bloatflies, which will help them in a fight against a player character.

Honey beasts appear only in Fallout 76. 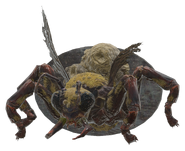