“Zion may not be lost to us, after all...”— Joshua Graham, Honest Hearts

Honest Hearts is the second add-on for Fallout: New Vegas, developed by Obsidian Entertainment and published by Bethesda Softworks.

After the First Battle of Hoover Dam, Caesar sent Ulysses to the Great Salt Lake to rally the White Legs to destroy New Canaan. With his help, the White Legs found a large supply of weapons. The White Legs then destroyed New Canaan, sending Joshua Graham (also known as "The Burned Man"), and the New Canaanites to Zion Canyon, where the Dead Horses stand with them against Caesar. The Courier then arrives in the Zion Canyon and meets the Burned Man, Joshua Graham, who is surprised that it is a different Courier than Ulysses that came to him, as he had figured Ulysses would come to murder him. This sparks the beginning of Honest Hearts.

Honest Hearts takes you on an expedition to the unspoiled wilderness of Utah’s Zion National Park. Things go horribly wrong when your caravan is ambushed by a White Legs raiding band. As you try to find a way back to the Mojave, the Courier becomes embroiled in a war between tribes and a conflict between a New Canaanite missionary and the mysterious Burned Man. The decisions the player character makes will determine the fate of Zion.

Notable new recipes include a method of turning one fission battery and 5 drained energy cells into 25 energy cells, as well as being able to make homebrewed Nuka-Cola and homebrewed Sunset Sarsaparilla at a campfire using the appropriate ingredients, (Nevada agave fruit and barrel cactus fruit for the Nuka-Cola, and Nevada agave fruit together with a xander root for the Sunset Sarsaparilla).

The add-on has also introduced two new ways of crafting scrap metal. You can create 1 scrap metal at a workbench by either combining a metal cooking pan, metal cooking pot and a pot together or by combining a butter knife, a metal spoon, a fork and a tin plate. The recipes are listed in the crafting menu as "Cookery-to-metal" and "Meals-to-metal" respectively.

This section is transcluded from Fallout: New Vegas locations. To change it, please edit the transcluded page.

The XP that is rewarded for quests is variable depending upon your level when the quests are completed. The total XP split between the main storyline quests is approximately 3000 XP at levels 1-4 and 22000 XP at levels 45-50, the secondary quest XP ranges from 75 XP per quest to 550 XP per quest.

“I keep seeing this criticism on tumblr that attacks the Honest Hearts DLC for "using Natives as an aesthetic" and that it suffered from "white savior syndrome". I am not going to offer my own opinion on this, but I'm curious what you think about all that, seeing as you did some writing for the DLC.

I understand why people see it that way, but how the DLC shipped was not how it was planned. The tribes in Zion are descendants of a mix of North American native people as well as other American citizens and European (of various non-native ethnicities) tourists/campers. This survives in the language of the Dead Horses, for example, who use a large number of German-derived words.

In the first design docs for HH, every tribe was supposed to have members from all of the F3/FNV ethnic groups. However, there was a complicating factor: body art. The various tattoos and body paints we needed to texture the bodies multiplied the number of required textures. They couldn’t simply be layered on (as they can in F4), but were entirely new body textures that dramatically increased the amount of texture memory being used. For that reason, each tribe wound up having only one body texture per sex. This compressed their ethnicities into homogenized blends, with Dead Horses being a darker tan, Sorrows a light tan, and White Legs (under the body paint) fairly pale.

As a minor point, Daniel was specifically supposed to be (and was, in data, for most of development) Asian. I don’t know when, how, or why he was switched to Caucasian, but that’s how he shipped.

It’s frustrating, because those changes slot Joshua and Daniel as white guys among (mostly) brown folk when 1) they weren’t supposed to be white guys and 2) the tribes were specifically called out as ethnically and culturally mixed without any real-world analogues.

Regarding the “natives as aesthetic” criticism, the patterns we used for the three tribes’ body art are not based on any current or historical native American body art (AFAIK). There are in-fiction explanations for each tribe’s specific choices. The White Legs initially colored themselves white to blend into the Great Salt Lake (where they are from) and they dread their hair out of reverence for Ulysses. The Sorrows use the river pattern to reflect their suffering and their connection to the Virgin River in Zion. The Dead Horses mark various accomplishments on their skin and decorate their clubs with .45 shells out of their respect for Joshua Graham.”— J.E. Sawyer on Tumblr
“Looking back, is there anything you would change regarding the "tribal" aesthetics used in the Fallout work you've done?" (apologies if this sent twice, tumblr glitched for me and said the first didn't send)

Yes. I’ve said this since Honest Hearts came out, but the tribes in that DLC were not meant to actually “look” ethnically Native American. They were supposed to be descendants of a broad cross-section of Americans of different ethnic backgrounds (including Native American) and European tourists (in my own trips through the American Southwest, I’ve encountered many French, Swiss, Dutch, and German tourists). We had prepared different skin colors to show that breadth, but we found out that when it was combined with the body art (which was intentionally not based on existing NA body art designs), we blew up the texture memory, which was already really limited on the PS3. The solution was to have just one skin tone, a mid-tone, which had the obvious, unfortunate side effect of just making them all look kind of Native American.

I think the naming and speech patterns could use another pass to avoid falling into negative tropes.

I’ve also said before that Daniel was supposed to be Asian, but for whatever weird reason, somehow his data was switched over to Caucasian (which, in that engine, automatically flips a bunch of face and skin data). This was again done to avoid having it be “two white guys saving Native Americans”. But that’s exactly what it looked like in execution.

The core plot of Honest Hearts was based on Lawrence of Arabia and The Mission. I think it cleaves too tightly to the inspirational material in making the outsiders be the main drivers of the native groups’ destinies. As a result, the native groups feel sidelined in importance/voice.

Finally, I think involving Native American consultants, especially from the American SW, at some stage would have been a good idea.

I take responsibility for the bad representation in HH. I think we did a better job in Deadfire because we did ask Asian devs within the studio to look at the Huana and Rauatai characters and their representation, but we should have also hired some Māori consultants specifically to look at the Huana. The Huana aren’t really Māori (just like the Rauatai aren’t really Japanese), but even a fictional culture that’s only “inspired by” a mix of real world cultures can still get into uncomfortable or outright bad territory.

A few Pacific Islanders have contacted me to tell me that they appreciate that Deadfire deals with PI-type cultures and colonial themes. I’m genuinely glad for that, but we could have very easily done something incredibly shitty through pure ignorance. It never hurts to ask ahead of time.”— J.E. Sawyer on Tumblr

Some tribal paintings on a canyon wall 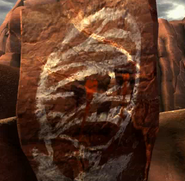 A painting of the Burned Man in Zion

Retrieved from "https://fallout.fandom.com/wiki/Honest_Hearts?oldid=3372349"
Community content is available under CC-BY-SA unless otherwise noted.