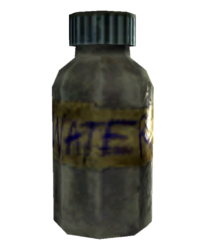 Holy water is a consumable item in the Fallout 3 add-on Broken Steel. It is produced by Mother Curie III by irradiating Aqua Pura.

While the Church of the Children of Atom wish for Division (getting their atoms split), the Apostles of the Holy Light wish to feel Atom's Glow (become irradiated). They believe that becoming a ghoul is humanity's next step towards perfection, and so "bless" Aqua Pura to help people achieve this holy state.

A message will report "holy water has worn off," similar to the message after drinking Aqua Pura. This may repeat at intervals indefinitely. There appears to be no ill effect. [verified]

Retrieved from "https://fallout.fandom.com/wiki/Holy_water?oldid=3513954"
Community content is available under CC-BY-SA unless otherwise noted.