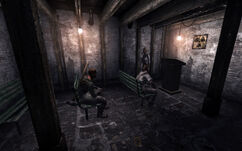 “Good people of Megaton, your salvation is at hand!”— Holy water pamphlet

Holy Water is a side quest in Fallout 3 that is added to the game with the Broken Steel add-on.

This quest will not be offered if Megaton was destroyed during The Power of the Atom. The Lone Wanderer picks up this quest from Scribe Bigsley after asking him what they can do to help. He asks them to investigate the area around Megaton to see why they need more water, after just being sent a week's shipment of Aqua Pura.

Investigate the vicinity of Megaton

In front of the entrance to Megaton, the player character witnesses a 'cutscene' of sorts. A non-player character named Rosa gives Micky a bottle of seemingly pure water. He drinks the water and dies. Rosa then approaches the Lone Wanderer, and after a short conversation she reveals that she received the water from a cult in Springvale.

Ask about holy water in the Holy Light Monastery

After finding the Holy Light Monastery, the Lone Wanderer encounters Brother Gerard. After giving them some holy water, he refuses to speak to the player character further until they drink it. Once the player character has done that, he reveals that the leader of the church, Mother Curie III, has been "blessing" water so that wastelanders may "bask in Atom's Glow."

Gain entrance to the Monastery

There are five options on gaining access to the monastery. One can ask Gerard if they may meet Mother Curie III but they must either be irradiated (equipping the ghoul mask can fulfill this option), pass a Speech check, pick the lock, kill Gerard and loot the key from his corpse or steal it from him via pickpocketing.

After gaining entrance, the player character enters the basement of the church by means of a trap door. Mother Curie is giving a sermon to two ghouls as the player character enters. Once she finishes the sermon, she engages the player character in conversation. She tells them that she has been intercepting the Aqua Pura from the Brotherhood caravans (whom she sees as "angels") and turning it into holy water by irradiating it. She does this because she wants to share Atom's gift with the people of the Capital Wasteland. This "gift" is ghoulification.

Stop the Apostles of the Holy Light

From here, there are four options. The player character can convince Curie III to stop via a Speech challenge, a Charisma check or by convincing her that they are the Prophet of Atom (with a radiation level above 800 rads). The Lone Wanderer can irradiate themself using the radiation traps (turned on with nearby switches), both in the basement and close to the entrance in Springvale. The fourth option is to kill everyone. But know that there is a feral ghoul reaver named Atom's Champion and a glowing one named Sun of Atom, both of which will turn hostile. Killing them does not take away Karma.

The Power of The Atom

Should the Lone Wanderer destroy Megaton after undertaking the quest, Mother Curie III can be found outside of Megaton as a hostile feral ghoul reaver. Brother Gerard can also be found as a regular friendly ghoul, who will say that he has seen Atom and that he is going to stay at Megaton to wait for Atom's guidance. Scribe Bigsley will express shock at Megaton's destruction but will still give the player character the money for completing the quest.

Retrieved from "https://fallout.fandom.com/wiki/Holy_Water_(quest)?oldid=3408710"
Community content is available under CC-BY-SA unless otherwise noted.