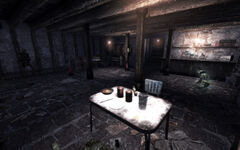 Atom's Champion and Sun of Atom

“I'm afraid it is not open to the unenlightened. Your presence would contaminate our great works. However, if you are willing to be baptized in Atom's holy Light, then perhaps I could allow you to enter and meet our leader.”— Brother Gerard

Holy Light Monastery is a small settlement which is inhabited by the Apostles of the Eternal Light in 2277.

Brother Gerard guards the entrance to a collapsed wooden building. Behind him, there are two radiation traps that can be activated with a button on a stand nearby. In the corner of the building is a cellar door that leads to the "Eternal Light Monastery."

The "Eternal Light Monastery" features a small chapel with some benches where Mother Curie III preaches to a group of ghouls, with a bookshelf off to the side of it. There are three beds for the cult followers, further downstairs are some radiation traps, a fridge, a table, a radio, two boxes of holy water and two non-hostile feral ghouls, called Atom's Champion and Sun of Atom (which can also go upstairs but are most often encountered downstairs).