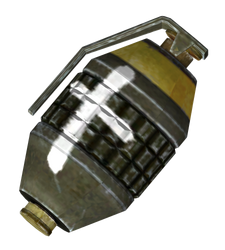 The Holy Frag Grenade is a unique thrown explosive in Fallout: New Vegas.

The only three Holy Frag Grenades are located in the basement of the church in the eastern part of Camp Searchlight, guarded by two golden geckos. It will only be available to players that have the Wild Wasteland trait. Players without the trait will find two mini nukes in the location instead. If the player originally did not choose the Wild Wasteland trait, but switched to it using the Sink Auto-Doc in Old World Blues before taking the mini nukes, then the Holy Frag Grenades can still be obtained.

On land explosion
Add a photo to this gallery
Retrieved from "https://fallout.fandom.com/wiki/Holy_Frag_Grenade?oldid=3308877"
Community content is available under CC-BY-SA unless otherwise noted.
... more about "Holy Frag Grenade"
RDF feed
Has platform
PC +, Playstation 3 +  and Xbox 360 +