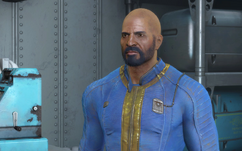 “Does it always have to be about sex and Jet? Let's just talk for a while.”

Holt Combes is a character living in Vault 81 in the Commonwealth in 2287.

He "works" with his wife Alexis as a general goods trader. Most of the time, however, when Alexis is working, her husband is spending time with Tina De Luca, whom he is rumored to be having an affair with. She and their daughter, Erin, are unhappy with the situation. Holt also shows distaste for his situation and directs his disdain towards his wife, asking her to "stop nagging" at him in front of the Sole Survivor.

Holt Combes appears only in Fallout 4.

Retrieved from "https://fallout.fandom.com/wiki/Holt_Combes?oldid=3345596"
Community content is available under CC-BY-SA unless otherwise noted.
... more about "Holt Combes"
RDF feed
Has platform
PC +, Playstation 4 +  and Xbox One +