View source
watch 24:51
Fallout Interactive Experience
Do you like this video?
Play Sound
“Holotapes are laser-readable media storage devices. In 2077, we used Holotapes to record audio and data files, like music, journals, even games. While this may seem primitive to you, two hundred years in the future, this was a common and popular technology in our time.”— Holotape instructions

A holotape (alternatively called a holodisk, holo-disc, or a THT (Tape Holography Technology) tape) is a durable laser-readable storage device produced by Wattz Electronics, based on the tape holography technology, storing their information safely for extended periods of time.

Developed using tape holography technology as early as 2063, holotapes are a high-density, laser-readable, manufactured-crystal storage device.[1][2][3][4] These disks and tapes were the very latest in pre-War information storage technology and quickly became the most widespread data storage medium, available in a variety of compatible variants.[5][6]

While early holotape models could store only as much as 256 kilobytes of data, averaging between 128 and 64 kilobytes, the latest models from 2077 could store up to 4 terabytes (4,000 gigabytes) of data.[7][3] Storage in holotapes were divided into "blocks" and a typical commercial holotape had a capacity of 256 blocks to properly store data.[8] The amount of data in a holotape all depended on the compression of the data.[9]

By 2287, the Institute had holotapes of their own, capable of storing the entirety of libraries, such as the Boston Public Library, onto their storage banks.[10] Holotapes were capable of storing transmissions and software backups, and G.E.C.K.'s were advertised as including a holotape with an abridged version of the Library of Congress as standard.[11][12][7]

Holotapes had more uses before the war aside from data storage. Specific models were meant to hold entertainment, such as music, movies, and holotape games, with special-purpose players developed for displaying large, high resolution volumetric images or to play holotapes for personal use in a home environment via holotape players.[13] Holotapes could utilize terminal functionality, adding the ability for use with stationary terminals, together with interactive games.[14][15][16]

A RobCo terminal with a holotape player was added as a part of the time capsule known as the "Treasures of Jamaica Plain," displayed among other remnants of the past in the Jamaica Plain Town Hall basement.[17]

Their appearance varies between games. In Fallout, Fallout 2, and Fallout Tactics, holotapes are interchangeably referred to as holodisks and contained holotape reels in a translucent protective casing, roughly comparable to a VHS tape or computer hard drive.

In Fallout 3 and New Vegas, they are flat, with a gray metal casing, a vision slit that reveals the tape reels, and square shaped.

In Fallout 4 and Fallout 76, holotapes were redesigned with an orange and yellow plastic casing that completely conceals the tape reels, with a gray metal circle in the upper left corner. When played outside power armor, the player character will open the PIP-Boy and insert the tape. They can also be played on terminals. In Fallout 76, calling an emergency supply drop actually requires the player to insert the emergency drop holotape.

Holotapes are based on the real world 1969 RCA SelectaVision HoloTape Player, which involved etching holographic grooves onto a tape for later playback.[18] 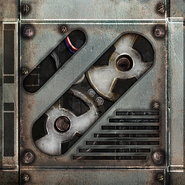 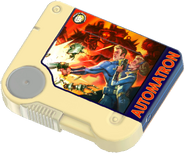 A game on holotape

A holotape in the wild

A whole bunch of holotapes! 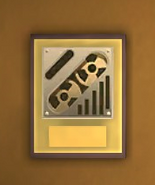