The holorifle is a weapon in the Fallout: New Vegas add on Dead Money.

The holorifle, along with other model types, was constructed by Father Elijah,[1][2] utilizing technology that he had obtained from the Big MT[3] and fashioned from the holograms in the Sierra Madre.[4]

Father Elijah implies that he invented the holorifle to circumvent the security of the Sierra Madre, which disallows the importation of standard weapons; most of the other weapons in the Sierra Madre were tightly-controlled and issued only to security personnel.

The weapon is unique in that its projectile is not a bullet, plasma, laser, flame, electromagnetic pulse, or electrical charge. Since the holorifle is based on hologram technology, it fires a concentrated photon-based energy projectile, and so is most similar to particle-based energy weapons (i.e., lasers). On impact, the projectile applies a "holorifle damage" effect, dealing an additional 15 damage over three seconds and visualized by glowing flakes wafting off the target (similar to the "flame damage" done by a flamer or incinerator) and knocking the target back. As with most other energy weapons, the holorifle's projectile will ignite any gas traps and other flammable hazards that it comes in contact with.

The holorifle uses microfusion cells for ammunition, loading up to four cells in a tubular under-barrel magazine. As the magazine is internal and like the tube of pump-action shotgun, the weapon must be reloaded by hand, one cell at a time, resulting in longer reload times compared to other energy weapons. However, the reloading process can be interrupted for immediate firing. The holorifle thus has the singular advantage of being able to immediately fire again if less than a full magazine is needed.

Due to the unique nature of the holorifle, it cannot be repaired by any other weapon, even with the Jury Rigging perk. It can be repaired only by weapon repair kits, merchants, or through ED-E with at least one rank of the Camarader-E perk.

The holorifle can fire a total of about 495 times using standard cells, the equivalent of 124 reloads, from full condition before breaking. Because of a bug, the reinforced components only improve overall weapon durability by 8 more shots, or only 2 more full reloads.

“It was initially (always) designed to actually be a grenade launcher that Elijah adapted for his own wacky purposes, loading in MFCs and ejecting them like spent shells. Something I wish we could have done to make it stand out more (but could not do for technical reasons) is make the ejected MFCs look like smoking, burned out batteries.”— J.E. Sawyer 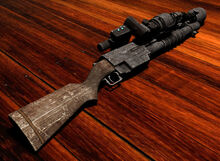 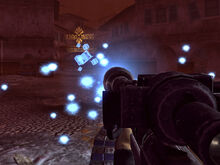 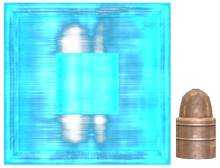 Holorifle projectile compared to .22LR bullet.
Add an image to this gallery

Retrieved from "https://fallout.fandom.com/wiki/Holorifle?oldid=3111952"
Community content is available under CC-BY-SA unless otherwise noted.