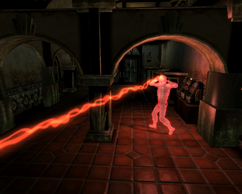 This weapon is used by the holograms in the Sierra Madre Casino & Resort. The Courier cannot obtain it normally. When added with the console, it appears to use energy cells for ammunition, but the weapon is actually looking for an add-on item with the same name. The stronger starlet variant does use energy cells and fires a blue beam instead of a red one.

Attempting to edit these weapons in the G.E.C.K. causes it to crash.

This weapon is carried by Sierra Madre holograms, but is never dropped, nor can it be found anywhere in the game. It is obtainable only via console command on PC or inventory edit on Xbox 360. Use the console command: player.additem xx00ad78 1

Retrieved from "https://fallout.fandom.com/wiki/Hologram_beam?oldid=3234737"
Community content is available under CC-BY-SA unless otherwise noted.