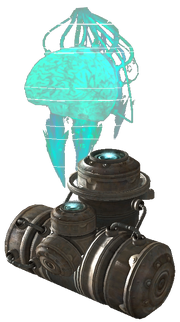 Holograms were an advanced experimental technology before the Great War and never achieved the same level of prominence as other forms of technology. Due to the enormous energy requirements for projecting holograms, as well as the cost of materials and manufacturing, holograms were largely unseen by the public eye, existing primarily in top-secret research labs and military facilities.

It is believed that hologram technology originally stemmed from Stealth Boy research, in a scientific drive to match Chinese stealth suit technology. One of the earliest hologram prototypes was developed sometime before the Great War at the request of Frederick Sinclair for his project, the Sierra Madre Casino & Resort. Under the name "Hologram Project," they were created in Big MT by the Big MT company at the Z-38 lightwave dynamics research facility using an enormous laser array. The initial research and development was a success, creating 3-D human figures, including a replica of Sinclair's love, Vera Keyes.

Sinclair wanted to take the project one step further: creating holograms with defensive capabilities. Big MT refused due to the cost of such an endeavor. Sinclair then turned to National Electric, who signed an exclusive contract with Sinclair to create. Working from technology already developed in Big MT, they succeeded, creating holographic security guards that could patrol restricted areas and attack intruders via laser beams. Due to the intensive energy requirements, holograms were linked with a nearby hologram emitter, only allowing them a limited area of travel.

Outside of Big MT and the Sierra Madre, Professor Calvert developed his own hologram projector to communicate with the Point Lookout tribals in Point Lookout, who worshipped him as a god.

Vault-Tec also has access to hologram technology in the form of a holographic communications device, capable of projecting one's face between two communicators holographic image, which was used in the Vault prototype and the Secret Vault.

All holograms in the Fallout universe appear as bright blue, monochromatic 3-D projections, often with visible scan lines and "flickering" effects similar to an old CRT monitor. Being made of light, they are intangible, and thus cannot be touched, held or, in the case of security holograms, killed. All holograms require an emitting device to appear. They are used primarily for displaying images for communication and research, although some are used for entertainment as well as security.

Service protocol holograms perform a specific function: greeters, simple vendors or in the case of the Sierra Madre casino itself, even monitoring gambling tables. These service holograms follow simple routines, being little more than robots. They cannot attack nor will they respond to attacks. In the Sierra Madre, they appear as ordinary humans with neat haircuts and fancy suits.

Security protocol holograms are somewhat more sophisticated than service holograms, capable of providing security to a designated area. Using invisible field-of-view sensors to scan their surroundings, security holograms can patrol a fixed path and respond to any threats they encounter with swift retaliation. Their memory cells can only perceive the area in a fixed cone in front of them, so two or more holograms are utilized to cover each others' blind spots. Once an intruder is detected, security holograms will turn from blue to yellow in color, indicating that they are aware of the intruder's presence. If the trespasser does not leave their line of sight, they will flash red, and attempt to subdue the target with a powerful discharge beam fired from their foreheads.

Attacking a security hologram head-on is useless; being made of only light, they cannot be killed, hurt or even slowed down by conventional weapons. Their only weakness is the hologram emitter they are bound to, which limits the range at which they will pursue their targets. Due to the limited range of hologram emitters, they can often be found near guards, after which they can be destroyed with a decent amount of force. Emitters can also be reprogrammed via terminals, either switching holograms to a non-hostile state or shutting them off completely.

Holograms appear in the Fallout 3 add-ons Point Lookout and Mothership Zeta, in the Fallout: New Vegas add-ons Dead Money and Old World Blues and in Fallout: Brotherhood of Steel.

They were also to appear in Fallout 2 in the cut location Environmental Protection Agency, and in Van Buren, the canceled Fallout 3 by Black Isle Studios.

The holographic generator in the Z-38 lightwave dynamics research

Alien communication hologram
Add an image to this gallery
Retrieved from "https://fallout.fandom.com/wiki/Hologram?oldid=3133890"
Community content is available under CC-BY-SA unless otherwise noted.