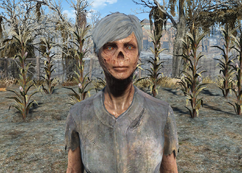 Holly is a ghoul living at the Slog in the Commonwealth in 2287.

Holly is a flirty female ghoul living and working at the Slog, a settlement initially set up by ghouls forced to leave Diamond City.

She will trade 'the goods' or tarberries for two caps per berry.

MacCready likes assisting the back and forth flirting, regardless of the gender of the Sole Survivor.

Holly appears only in Fallout 4.

For some reason she will not start any specific dialogue, only greeting the Sole Survivor with a number of standard phrases. Moreover, after completing The Slog: Greenskins she will only be able to trade via standard trade window thus making this quest impossible to complete. [verified]

Retrieved from "https://fallout.fandom.com/wiki/Holly_(Fallout_4)?oldid=3355827"
Community content is available under CC-BY-SA unless otherwise noted.
... more about "Holly (Fallout 4)"
RDF feed
Has platform
PC +, Playstation 4 +  and Xbox One +